Fundraising vs. Crowdfunding: what's the difference?

What is the difference between fundraising and crowdfunding? We answer the big question!

After the internet revolution, people’s lives (or at least, extra soft copies of their lives) have moved online. And as India and her people warmed up to the internet its unprecedented power to erase boundaries and bring people closer together, another innovation shook the Indian consumer market.

The smartphone arrived, and arrived in glory. Overnight, it seemed, everyone had a smartphone and therefore, access to the internet, and soon, a profile on Facebook , if not on Instagram, Twitter, and Snapchat, and WhatsApp installed to stay in touch with friends all over the world for free!

The pocket-friendly smartphone and the easily accessed, affordable internet plans supplemented each other so young India’s social, cultural, and even political lives went online, and it looks like they are there to stay.

When you fundraise, you state your cause (your reasons for raising funds, or your need) and ask for help with funds (or other resources). People voluntarily give to your cause, or your campaign, with the understanding that funds given are “gifts” given in empathy with your need and are not to be paid back.

Fundraising is nearly as old as the human communities that took civilization forward after money was invented and brought into populist use. The earliest fundraising initiatives, often to celebrate religious festivals or to build places of worship, were contributed to by affluent members of community.

That tradition has held through centuries, although tremendous variety has appeared in the causes that people and nonprofits fundraise for with success.

For a complete overview on fundraising, here’s a free Fundraising 101 guide!

Crowdfunding vs fundraising: What does offline fundraising in the modern world look like? 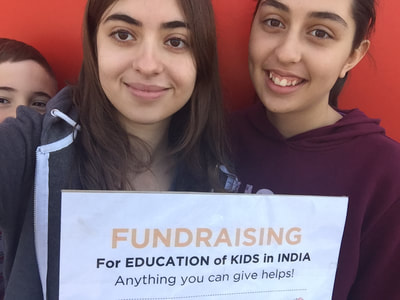 For the average nonprofit, it means spending months and endless man hours per year writing proposals and grant requests for pools of philanthropic money, or limited endowments that can come from corporate social responsibility funds.

These funds are not only competitive to get, but often do not help cover all needs, including operational costs and the needs of a specific change-oriented campaign that the nonprofit is running.

Door-to-door fundraising too goes on; this is just what it sounds like, with canvassers going to people's homes and workplaces, or even soliciting the public on the streets.

When fundraising began to make a move offline, it made a big save in terms of labour, and another in terms of overhead costs.

Crowdfunding fundraiser: How much of fundraising has really gone online? Organizations in both the West and in India collect fundraising revenue in donations made both online and offline. A Charities Aid Foundation report from 2015 shows that only about 10% of all contributions made to charity in India were made online (they attribute such a small fraction of donations made online to the fact that most Indian donors were older and not internet savvy).

At about the same time, a study examining the giving habits of donors in western societies showed a similar finding - 90% of all funds that nonprofits were collecting came in the form of donations made offline, through cash or check.

Interestingly, an observation that applies to everywhere in the world as far as fundraising is concerned is that many new and young donors will donate online.

As giving strays to the offline space, charities have one more risk at hand: the median online donor is more generous than their offline counterpart, and donates more cumulatively over a lifetime than multi-channel givers and offline giving loyalists.

Here’s a quick take on how to fundraiser online.

Let’s just say that fundraising is still going online. The process isn’t over yet, but in the next decade or so, we will see a rise in the number of people who consistently make donations to charity online.

And nonprofits, individuals who fundraise, philanthropists, social sector workers, and donors are all learning the ropes, as we write, about how online fundraising can be perfected and refined so everyone involved can have a rich and rewarding giving experience.

This is where crowdfunding comes in.

Crowdfunding has already been conceptualized and developed and honed by innovators and users for it to have come into its own as a unique and useful method of online fundraising.

Crowdfunding is the biggest subset of fundraising, once all offline and online modes of traditional and new age forms of fundraising are taken into account.

Crowdfunding is an alternative method of raising funds, done online, with a large number of donors, each typically contributing a relatively small sum, coming together to meet a big goal amount.

Crowdfunding campaigners promote their projects on social media and commonly ask their friends, relatives, fans, supporters and virtual friends for donations. The most successful campaigns go viral through social media sharing, with strangers donating to the cause.

We often get asked what one can crowdfund for.

The short answer is that you can crowdfund online for anything, just as in days of yore you could fundraise for anything unless the raised funds were used illegally. Funnily, crowdsourced funds have been used to sponsor war efforts, notably the Indo China war of 1962, and the American Civil War’s Confederates a century earlier. But in the modern world, you can go online and solicit crowdsources funds for things as crazy as these:

How to do crowdfunding right The best, most successful crowdfunding campaigns are run by people who excel as planners. Months before the campaign goes live, it is a good idea to start letting your supporters know that you will be beginning to raise funds.

This will not apply to medical crowdfunding, but nearly all other kinds of campaigns can only gain from the positive buzz that surrounds your campaign and puts potential donors in a place to make informed giving choices before it goes live. Here are some things to keep in mind.

If you have a clear goal and a strong will, it is very hard to go wrong with crowdfunding India.

Reinforce yourself with a good friend or two to help out with the crowdfunding enterprise, set aside a few hours everyday to give to your cause, think positive, and you’re ready to go.

We wish you victory with crowdfunding!

How To Build An Online Community For Fundraising?