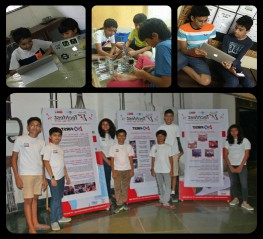 We are the members of TECH M8, a young robotics team of kids aged 12 to 15 from Mumbai for the prestigious FIRST Tech Challenge (FTC) competition. Over 85,000 students, 34,000 teams, from 80 countries around the globe compete in this robotics competition. Guided by Coaches and Mentors, the FIRST teams are challenged to design, build, program and operate the robots. These are major science and technology events attracting more than 300,000 visitors and participants. Students develop STEM (science, technology, engineering, and math) skills and practice engineering principles, while realizing the value of hard work, innovation, time management, and sharing ideas. This year’s challenge is called “Velocity Vortex”. The robots built by the team members are designed to complete a range of given tasks as efficiently as possible described in this you tube video https://www.youtube.com/watch?v=MCQ_pgSw_-8

Press Release to mention the company as a sponsor

Company name to be mentioned among sponsors in all media interviews

Thousands of students, parents, and spectators that attend the International FIRST Competition nationally in Delhi and Internationally in US and other countries. Sponsor will be featured in all event where TECH M8 team participates

Team TECH M8 attended the IIT Tech-Fest in Mumbai held on 15th December 2016 where 165,000 people including students from 2500 colleges attended the event. Members of TECH M8 presented their project at the Innovation Tech Challenge where they got selected out of 500 entries & made it to top 20. Team TECH M8’s project was awarded the first prize at IIT Tech-Fest.