With you we can save a baby girl from slaughter

With you we can save a baby girl from slaughter 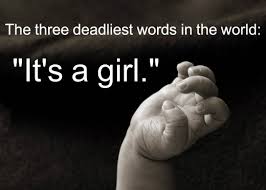 Dear brothers and sisters It is not a story, it is a bitter truth. Yes i am talking about prenatal sex determination test and abortion of girl child. As i live in a rural community in Haryana state and where sex ratio of boys and girls is dangerously low. In some villages and community it have only 700 girls in comparison to 1000 boys . It is all because of illegal prenatal sex determination and female feticide.Due to obsession of boy child, this practice is increasing in all type of people, rich or poor, rural and urban, educated and uneducated. Notorious for female foeticide, Haryana ranks a poor 31 among Indian States and Union Territories on sex ratio with just 877 women per 1,000 men. Though no concrete figures are available on the exact number of female foeticide cases, an estimated 37,000 girls are killed every year in the State before they are born. The fact that Haryana, with just 2.2 per cent of the total children in India, accounts for 4 per cent of the female foeticide cases speaks volumes about the extent of problem. Though the law prohibits sex-determination and illegal termination of pregnancy, social workers argue that the situation on the ground has not changed much over the years. I closely watched and find that “Despite all the laws, the implementation is poor. It is only in certain cases where the senior officials take keen interest in checking the menace that the situation has shown some improvement. Like in district Jhajjar, the Deputy Commissioner concerned was strict on illegal sex-determination and took action against even some politically well-connected doctors engaged in the malpractice. But it is rare,” In our part of rural haryana girl child is still considered a burden and parents want to get rid of her before she was born. “Despite all programmes and schemes, the mind-set of society has not changed much. The rural folk consider girls to be a financial burden due to dowry system. With the growing number of cases of elopement and inter-caste marriages, people in the villages prefer not to have girls because people saw these act will hurt their honor. In urban areas, the working couples want only one child and mostly prefer a boy.” With the government tightening the noose over clinics engaged in sex determination, now portable ultrasound machines are being used for the purpose and gave the home delivery. Here came a nexus of some corrupt doctors, ultrasound operators, some govt official of civil and police department and their network of agents in every locality and villages. This business is worth billions. Which we say ultrasound mafia.   When i was in university completing my degree, we have a group in which we aware nearby village people against female foeticide. When i came back i saw this evil on large scale. I saw this mafia kiling girls and make blood money. Govt make some hard laws possible against it and spend large money to aware people. But on ground level this evil practice is taking place on large scale. So i decide to do something to make these girl child to see this beautiful world. One day i came to know that one labourer working on my farm is planing to have a prenatal sex determination and abort if it is girl. I visit his home and convince the couple to have not test and abortion. I said that if they have no test i will bear all the expenditure from pregnancy to delivery. This was my first success. Then i realize that i can do more. Then i start to monitor all the pregnant ladies in my village and convince them. From last 3 years there is 0 test and abortion in my village. We start to track these ultrasound operators. We want to stop them and sent them to jail. But police can only caught them red handed. So we start to sting operation with fake customers. People with pregnant ladies My block have 84 villages. I want to start awareness campaign in all of it. I made a team of equal minded volunteers in villages mainly in poor neighbourhood. Then i realize that this ultrasound center act as a mafia and they have their agents everywhere. Some corrupt police man and doctor help them also. If they have caught nobody testify against them and they again starts their bussiness again. Then we start awareness people as well as prepared people to stand against them. We help witness against them and bear all expenditure of witness. We have help police to nab 7 gangs and booked them. Govt doES very well and have strict law possible against them. Internet and social media is full of materials against girl foeticide. But social group in question is far from that. If u want to aware them u have to go in between them. So we work low profile and convince them by talk to them. This is most effective way to motivate against girl foeticide.