Empower And Create Brighter Futures For At- Risk Cambodian Girls

Empower And Create Brighter Futures For At- Risk Cambodian Girls 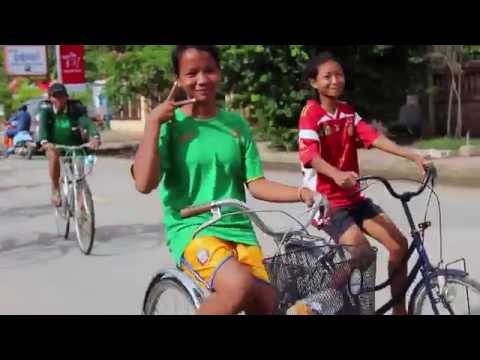 The SALT Academy in Battambang provides Cambodian youth with the ability to participate in the world’s most popular team sport: football. The game promotes friendship and team work, inherently emphasizing respect and discipline. However, it is widely regarded as a boys’ sport globally - given the prejudices revolving around the sport in terms of gender, our focus has been on providing training opportunities to young women and girls who find themselves at-risk of negative social patterns. Using football as a common enabling structure, we have challenged and reworked commonly held visions of traditional gender roles within our little community and hope to spread this vision beyond our current capabilities.

Cambodia is deeply rooted in restrictive and hierarchical culture and is rife with gender issues. Gender inequality in Cambodia is still palpable, causing girls and women to be undervalued, discriminated against and eventually underrepresented in all aspects of the civic society. Correlated with poverty, particularly obvious in rural areas, girls and women are highly at risk of violations of their basic rights. Cambodia is one of the poorest countries in South East Asia with 52% of its population aged under 25 years old, shifting the financial responsibilities onto children. In this light, girls are particularly at risk of negative social patterns, such as human trafficking, early marriage and domestic abuse and rarely occupy leadership positions in society.

Women have to overcome disadvantages in getting quality education, employment opportunities and leadership roles all over the different economic sectors leading them into hazardous situations. The Mighty Girls program tackles these issues by connecting communities and supporting them through a football-based program. The program contributes to improve academic achievement, increase self-esteem, self-confidence and enhanced sense of control over one’s body. It gives girls and women access to leadership opportunities and experience and cause positive shifts in gender norms that afford girls and women greater safety and control over their lives.

SALT Academy uses football as a vehicle for positive change, providing under-served youth a toolkit to overcome obstacles to growth, inclusion and personal success that contribute to make the world a safer place for women and girls.

Meet Nipha: one of our most successful Mighty Girls

After finishing the Mighty Girls program in 2014, she was officially announced by Phnom Penh Crown Football as the head coach of the U-13 boys’ team. Her selection can be seen as another milestone regarding the empowerment of girls in Cambodian football and society.

Young Cambodian women need mentoring and targeted information in order to challenge restrictive social roles on their own terms. Spurring changes in both male and female mindsets, SALT’s organizational objectives and advocacy of gender equality and empowerment of females are spreading across provinces on what it means to be a Cambodian woman today.

Fund Utilization
Our fundraising goal is humble USD$ 4,000 but it will impact hundreds of young vulnerable girls in Cambodia.

The breakdown of the fund utilization is as follows: