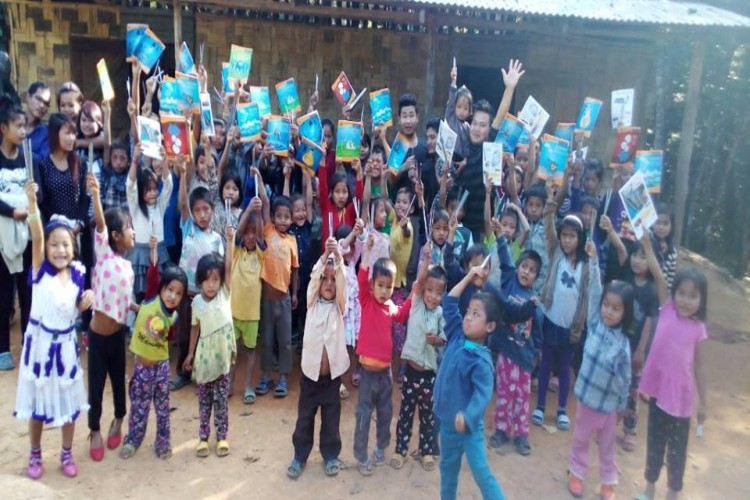 Born and brought up in a small town belonging to the state of Manipur- which is in the  north-eastern part of India , where thousands of people are still living in villages and practices the same old culture. We get to see a lot- as in the darker side of life which haunts many till their graves. Maybe because we were fogotten by our own government, maybe we were ignorant of the changing tides or maybe we were just too dumb.. but whatever the cause, the outcome is not pretty and so it's finally time to wake up and fight for a cause, starting with what we considered the main hindrance to our advancement- EDUCATION. Now by Education, i do not mean that we were gonna teach maths, science and what not.. but whatever we could according to our capabilities, atleast the basic way of living so that it will provide them the foundation to build and develop themselves in the future.

Along with some dedicated friends who share the same cause, we started planning to go visit atleast  the nearby villages and start the mission, everyone was excited and ready but.. the only problem was money so we decided to collect funds by selling stuffs for profits, washing blankets and also asked donations from some who are well-to-do in the society.. Luckily we could arrange the money  and so we set forth for our first Mission which was about 100 km by Bus  from which we had to walk by foot  about 40km.. We set out early in the morning and reach the last bus stop by noon.. Then we started our way to the village. The walk by foot was daunting as we each carried about 20 kgs of goods on our backs and had to literally walk on the side of a mountain which was less than a metre wide..  but since that was the only way, we had to((we aimed at making the path more accessible) .. And so we reached our destination only by nightfall..

We stayed in village for 3 days during which we conduct various activities for the childrens.. we also gave out some socks to the old and weak.. The smile on their Faces was priceless, all the fatigue, all the tiredness was gone.. All we had had left was happiness in our Hearts.. Everything was worth it.. So We made a Pact that every year, we are to visit villages like those no matter how tough the situation gets, we are not gonna stop spreading the smile .. So this year, we plan for something bigger, we want to make the roads bigger, we want to teach them with illustrations, we want Big.. so Here i am, asking for a helping Hand.. Help us keep the Smile.