Join Me! Let’s Shoot for the Stars

Join Me! Let’s Shoot for the Stars 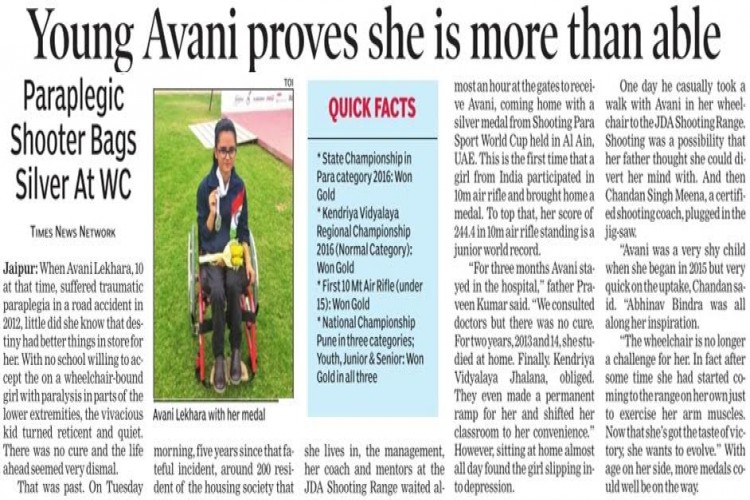 We have a chance to make a real difference in the life of a determined young woman.  Just five years ago, at the age of 10 years, my young friend, Avani Lekhara, was in a tragic car accident leaving her paraplegic without the use of her legs.  For many of us, our will to go on would have become non-existent.  Not for Avani.

After having suffered the accident, debilitating depression and other setbacks, nearly five years to the day after her accident, Avani has accomplished the seemingly impossible and won a silver medal in the World Cup Shooting Championships in February 2017 held in the UAE!  Now, she is seeking sponsorship to compete in the 2018 Asian Games in Jakarta and the 2020 Olympic Games in Tokyo.  Will you help?

When Avani’s parents, Praveen and Shweta, took her to a shooting range in Jaipur to try her skills at Rifle Shooting and Archery, they could only hope that their daughter would see that her abilities were not limited to those that required the use of her legs.  Imagine their surprise and delight when Avani showed masterful command of the rifle, hitting nearly every target with precision!

If Avani’s story touches your heart as it has touched mine, please help to send her to these competitions so she can compete on the world level!  Avani and her family hope to raise Rs. 21lakhs by August 2017 and further Rs. 18 lakhs July 2019.  Any gift is appreciated!

I am so grateful for your contribution as we support Avani to SHOOT FOR GOLD!