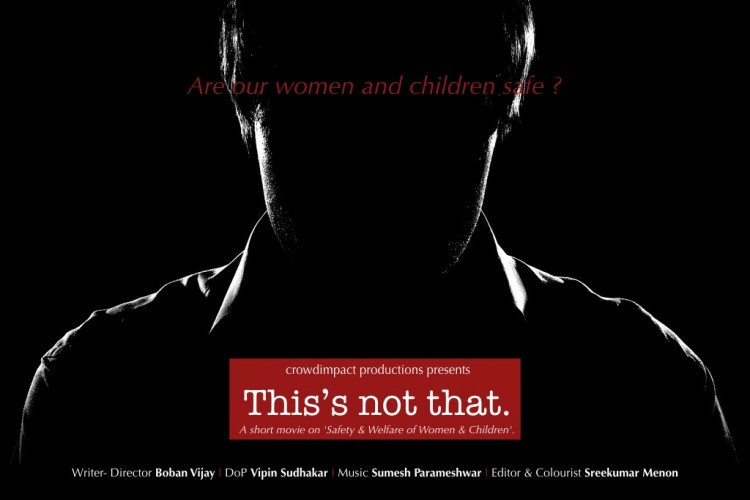 Good day to you. My name is Boban Vijay. I work as an Asst. Director based out of Kochi, Kerala, India.  As you know, we have been witnessing lots of molesting news through years now. Its happening in various parts of india irrespective of the age, class and creed of the victims.

To follow Mahatma Gandhis words 'Be the change you wish to see in the world', and as a socially responsible person i like to  kick start a campaign to make people more aware of the continued mishaps and make them think of ones responsibility to the society and spread the word around through my short movie 'This's not that'.

‘This's not that’ is a 3 minute short film that would indulge into the viewers minds and make them think about themselves, social responsibility of an individual, their outlook towards the society and the relevance of the subject ’Safety & Welfare of Women and Children’

The movie is narrated using ’the shadow of a man’ that represents men in common.

A show of a man emerges from darkness. It is walking aimlessly through a dark street. After a while’s walk it reaches an empty four lane city road with lamp poles on the median and concrete buildings on the other side of the road.

The shadow looks around and it finds some gypsies sleeping on the footpath in front of the buildings on the other side of the road. It crosses the street and crawls near to the people sleeping on the footpath.  It looks at them. There are men women and kids sleeping there. It crawls over and watches them. It finds a beautiful gypsy women and a girl kid sleeping next to her. The shadow stops over them, stares at them for a moment. Careful enough not to disturb anyone sleeping, the shadow takes of the bed sheet on them revealing their partially naked bodies. What happens there after is the story of ‘This's not that’.

Let's create a campaign and spread the word around . The movie would be produced under the banner 'CrowdImpact Productions'. I request your esteemed association and invaluable contribution to realise this project.

Looking forward to your sincere supports.