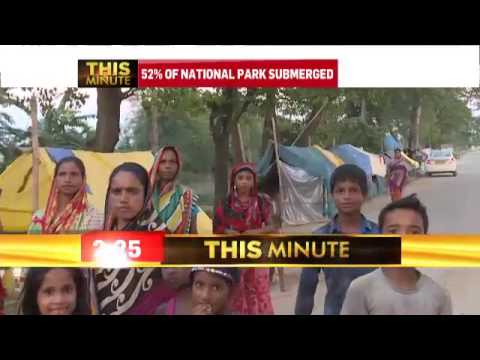 Due to incessant Monsoon Rains all over Assam, over 50 villages have been inundated in Dhemaji, approximately 57 villages in Lakhimpur and 12 villages in Majuli districts killing more than 60 persons so far. The current wave of flood has affected 20 out of the total 32 districts in the state and affected over 12.55 lakhs people spread over 2053 villages under 67 Revenue Circles. Of all the 20 districts, the flood situation is worst in Lakhimpur district because of the release of water from Ranganadi Hydel Power Project of the North Eastern Electric Power Corporation (NEEPCO) for the protection of the dam structure. The situation has turned wore in neighbouring Dhemaji district too because of incessant rains in upstream areas in Arunachal Pradesh. Red Alert has been declared in Lakhimpur district and Chief Minister Sri Sarbananda Sonowal has expressed concern over the flood condition declaring it as an SOS situation in both the districts. The flood situation has entered a critical phase in North Lakhimpur Revenue Circle where fifty seven villages have been affected by the flood caused by the increasing water of Subansiri, Ranganadi and Ghagar rivers. The worst affected areas are Ghunasuti, Pub-Telahi, Lohit-Khabalu, Aamtola, Mohaijaan, Rontijaan and Borbeel. The list of the submerge villages in Lakhimpur include Gukhanibari, Gelahati, Rowdung, Sengelijan, Ahumoni, Rangapathar, Pub Putabil, Shantipur, Dambukial, Tokoguri, Ahum Guhaigaon, Bongalchuk, Borgaoyan Gendali, Borpathar, No. 2 Sonapur, Borsala, Boroluwa, Haribor Doloni, Rangabari West in Nowboicha, Telahi, Lakhimpur, Karunabari Development Blocks. In Dhemaji District flood has largely affected food security and livelihood of the people by affecting “early variety of paddy” (AHU) and “Flood resilient paddy (Bodo variety)”. The rising water level is prominent in “Gali River”, “Simen River”, and “Dikhari River”. All tributaries to Brahmaputra flowing from Arunachal Pradesh and trespassing Jonai Block (Missamora Panchayat, Ramdhan Dikhari, Lai Mekuri) have affected approximately 50 villages and “Jalakiashuti River” trespassing Sissiborgaon Block has affected 5 villages under Silashuti Panchayat. Some of the affected GPs include Dakhin Ahatguri, Karatipar, Silakala, Garamur (partially), Phulani, Jengraimukh (partially), Ratanpur Gaon and Luitporiya. In Majuli increasing water level of Brahmaputra have submerged 12 villages and a few chaporis viz. Arjunguri, Puranachapari, Natun Chapari, Chelek, Bahir Chilakala, Lohit Chapari, Kamalabari Ferry Ghat etc., have been affected by floodwater. Red Alert has also been declared in Kaziranga National Park, a UNESCO World Heritage Site and a wild life sanctuary that houses the one-horn rhino, where flood water has inundated over 70 percent of the wildlife habitat driving the animals to the foothill areas across the national highway towards the south spreading across both banks of the mighty Brahmaputra River. There is a need for massive flood-relief measures in these areas as the normal lives of the people are disrupted and most of the villages like Bangkeleng, Dighali and Mohbal villages under Ghilamora block in Lakhimpur distict are in dire need of relief and help.

The above-mentioned highlighted villages have been identified for flood intervention by ICCo and
Grameen Sahara.