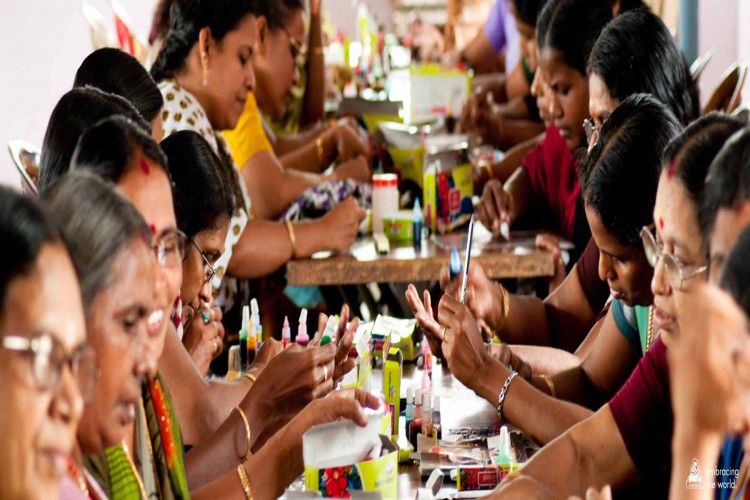 It is a harsh reality that people of India are victims of unemployment and poverty. Population living in rural India, especially the poor and marginalized women, is suffering because livelihood opportunities are very less for them. They are responsible for generating supplementary income for their families apart from handling the household chores. A part of small amount they earn from their daily labor also gets swallowed by the business holders and middlemen. Even after more than 50 years of Independence, India still stands in the category of world's largest number of poor people in a single country. Of its nearly 1 billion inhabitants, an estimated 260.3 million are below the poverty line, of which 193.2 million are in the rural areas and 67.1 million in urban areas.

The number of poor people in India, according to the country’s Eleventh National Development Plan, amounts to more than 300 million. The country was successful in reducing the proportion of poor people from about 55 per cent in 1973 to about 27 percent in 2004.

But almost one third of the country’s population of more than 1.1 billion continues to live below the poverty line, and a large proportion of poor people live in rural areas. Poverty remains a chronic condition for almost 30 per cent of India’s rural population. The incidence of rural poverty has declined somewhat over the past three decades as a result of rural to urban migration. Poverty is deepest among members of scheduled castes and tribes in the country's rural areas. In 2005 these groups accounted for 80 per cent of poor rural people, although their share in the total rural population is much smaller.

On the map of poverty in India, the poorest areas are in parts of J & K, Rajasthan, Madhya Pradesh, Uttar Pradesh, Bihar, Jharkhand, Chhattisgarh and West Bengal. With about 38%of population living below the poverty line during 2004-2005. Among different social groups scheduled tribes with 57.14% and schedule caste with 41.21% of population below poverty line were regarded as the poorest in the state. The high poverty rate is perceived as a result of low growth in output and employment, skewed land ownership and assetlessness among the people.

In Jammu the industrial Growth has increased in the recent years but it is still very low in comparison to the other states. On the other hand, the state is known for two important industrial activities, First Handloom and specialized textile printing and second, nature historical tourism. Promotion of traditional textiles and tourism is attained with a view to create employment/income generating activities for the local communities. There is however a need to balance the sectors in such a manner that these activities may retain their roots in local producers/entrepreneurs and buyers /customers. There is also a need to preserve and develop these activities so that people can draw economic benefits from using the available natural resources and their skills.

Jammu and Kashmir Humanity Foundation (JKHF) is a non-profit voluntary organization which works for the development of poor and deprived communities and also to generate livelihood opportunities for them. This project is a step forward in this direction. The organization proposes to initiate a project on establishing an Entrepreneurship Development Center in the target area. It will provide entrepreneurship development training in skills like Tailoring, stitching, embroidery, handicraft and basic computer, electronic data processing and basic hardware to the poor people in target area.

Various modes of awareness generation techniques will be incorporated to disseminate information among masses about the need and importance of skill development and self-employment & job creation through establishments of micro enterprises. Awareness among the community and target beneficiaries would be generated through print literature, pictorials, local media, meetings & information sessions.

Post completion of skill development, specific training in entrepreneurial skills will also be provided through trained panel along with formation of SHGs, exposure platform for their finished products through participation in exhibitions and haats.

Suitable forward linkages will also form part of the sustainability of the project comprising of credit facility, liaisioning with financial institutions, development of skill based brochures for recruitments, marketing and bargaining skills, management and allocation of roles and responsibilities in the SHGs.

Monitoring and Evaluation would be done under the observation of project coordinator and other team members. Effective steps would be taken to sustain the project for long period.