We journey across 8 instances that show that when a calamity knocks on our doors and the road ahead seems jarred and uncertain, humanity will rise up to the challenge.

The Kerala floods need no introduction. With 357 deaths, 906,400 hectares worth of crops destroyed and an insurmountable amount of property damage, the cost to the state and its people comes up to a grand total of Rs. 19,512 crores. 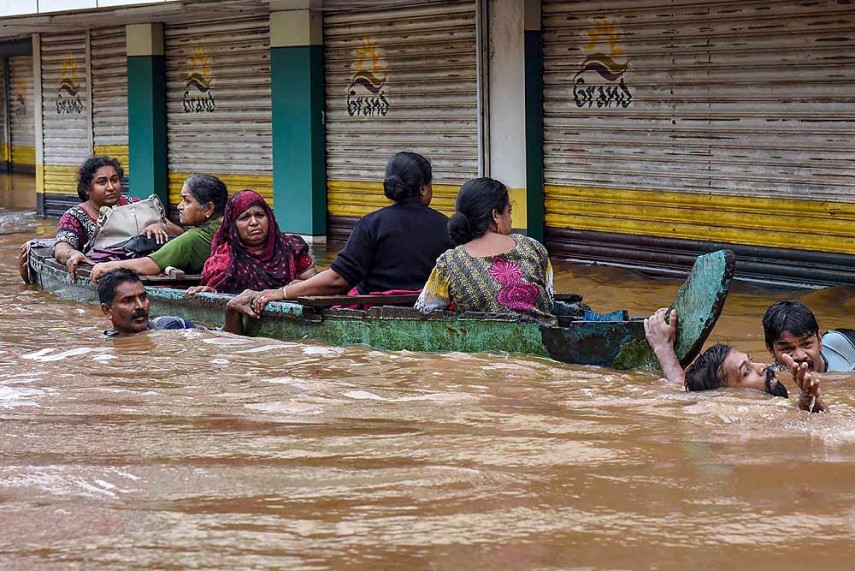 With the rising destruction and destitution however, there was also the unearthing of heroic spirit and brave gestures that helped to save thousands. NGOs, men, women and animals, each played a part to help the sun shine a little better on what had been a cloudy beginning for Kerala.

Mentioned below are 8 occasions where we proved that with a little bit of courage and a heart full of good intentions, can take humanity a long, long way.

1: Blanket Merchant gives up his only source of livelihood

“I thought he was joking. I asked him how he would earn his living if he donated his blankets. But Vishnu was adamant. We took him to the Adichu Kootti school where a new camp had opened.” an official told the media.

Vishnu Kachhawa, a resident of Irrity, in Kannur district of Kerala is a blanket merchant who sells his blankets from door to door to support his family. On realising the plight of hundreds of displaced survivors, he donated his entire stock of blankets to a flood relief camp in Mangad.

“Kerala has given me everything—a place to stay, a livelihood to support my family and raise my children. It was time to give back,” says Vishnu.

The water was gushing in through the 5th gate of the Idukki Dam, speedily submerging a bridge lying in its path. Kanhaiya Kumar, saved the life of an ailing child by rushing him across a bridge that collapsed moments after he was saved.

You can view the video here.

"We were collecting clothes, buying rice and other stuff and putting them in small packets to be sent to the camps. They were noticing this and then they came up to me and asked me how they could help," said Fathimma , their mother.

Kochi kids Haroon and Diya had been saving their Eid money since 2016. Their piggy bank was made by Haroon during one of his summer camps and they were both especially protective of it and its contents. Inspired by their family, the young duo decided to give up their savings of Rs. 2210 to the CM’s Flood Relief Fund in Kerala.

Braving the unstable weather conditions, Air Force officer, Commander Prasanth slid down a rope from his chopper to rescue a toddler. The baby was stuck on the terrace of a floating two storeyed building that was completely uprooted due to the ravaging floods.

A teary eyed mother and a scared, shivering child were reunited, thanks to this braveheart!

The hero has saved a dozen other lives in Kerala.

You can watch the video here.

Hundreds of fishermen patrolled the water-filled streets of Kollam, Alappuzha, Ernakulam and Thiruvananthapuram. Their boats easily navigated through the choppy waters, saving thousands of distressed victims of the flood.

You can watch the video here.

It was around 3 am when Rocky started barking maniacally. P Mohanan and his family tried to ignore it, but their furry friend’s barks were getting more and more urgent by the minute. On leaving their house to check on Rocky, they saw the impending disaster that their protector was saving them from. Moments later, a landslide destroyed their home, that was located in Idukki district.

The family and their dog have been safely moved to a government run relief fund close by.

7: Elephant finds itself lost and in unfamiliar territory

When locals saw a wild elephant confused and stranded on a rocky terrain in the middle of the river, they safely assumed that the poor animal had been swept away from its kindred.

Authorities were alerted, and after a 4 hour long effort, the lost elephant was rescued.

8: The Navy’s quick thinking helped save a pregnant lady and her unborn baby

Shajitha Jabil, a resident of Aluva, was seeking refuge in her home which had been isolated due to the relentless rain. To make matters worse, her water broke. Just when she was about to lose hope, the Navy spotted her and she was quickly airlifted.

The lady was then rushed to the hospital where she delivered her healthy baby boy.You can watch the video here.

That’s right. You too are a hero. We all carry a little bit of heroism within us. And all of us know someone or someone who knows someone that has been affected by the Kerala floods.

There are still people stranded away from their families. The relief camps are fast running out of basic necessities and supplies.

So if you haven’t already, you can now become a part of the Kerala saviours’ community by contributing here:

If you wish to create a fundraiser to help the flood-affected victims, you can click here.