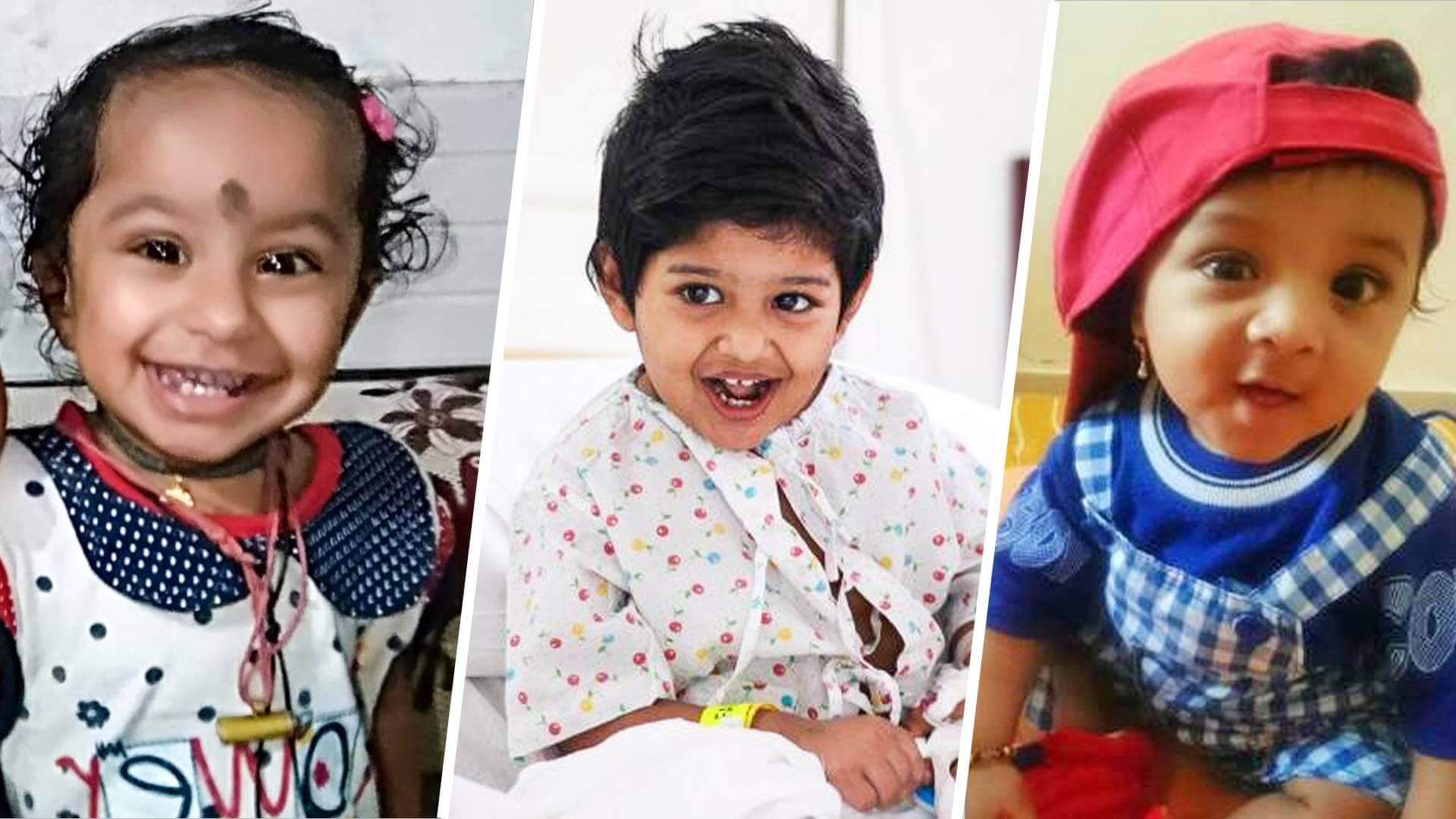 Children's Day 2018: How Crowdfunding Gave These Brave Children A Second Chance At Life

The most heartbreaking sight for any parent is to see their child suffer. A mere fever or viral can become a cause of concern for a parent.

Hence one can only imagine the pain parents bear knowing that their child is suffering from a life-threatening disease like cancer, heart disease, liver or kidney failure etc.

Aside from being worried sick about their child's health, parents have to bear the extra burden of the heavy treatment costs.

It's a known fact that treating cancer and other such serious diseases can put a huge financial pressure on families, especially those hailing from a poor or middle class background.

Medical treatment in India, especially in the private sector, is exorbitant to say the least, where 5 chemotherapy sessions can make on shell out close to Rs. 5 lakhs easily. Many Indians are not applicable for loans and most of them don't have insurance covers. Those who do manage to pay treatment cost by hook or by crook, are left with massive debts and pushed below poverty lines.

Such cases would have left parents feeling helpless, if a practice like crowdfunding wouldn't have existed to save the day. Crowdfunding is a practice of raising funds online where the process involves asking for a small amount from a large group, to meet the target amount.

Crowdfunding has been gaining popularity in India, especially with regards to medical causes. A lot of Indians are turning to this practice as the process is easy and doesn't require one to repay the funds collected, unlike in situations where people borrow money, take loans etc.

From 6 months old to 60 years old, lives from all ages have been saved through the power of crowdfunding. But because the nation is celebrating children's day today, here's a look at some of inspiring cases, where crowdfunding saved lives of these precious and brave children. Read on:

3-year-old Shlok Bhansode was a happy-go-lucky child as it is obvious from his pictures. He would keep running around the house, making sure that he keeps his parents on their toes.

Trouble began when Shlok started experiencing  breathlessness. Even walking a few steps seemed like a task for him, let alone running.

He started to become extremely weak, leaving his parents shocked. They couldn’t believe this was the same 3-year-old who would turn the house upside down with his antics.

They got him tested and were devastated to know that their precious son was suffering from Dilated Cardiomyopathy, a life-threatening heart disease.

Shlok was becoming weaker, and would cry in extreme pain. He would gasp for breath and couldn't even sit up straight on the bed. The doctors said that his only chance for survival would be a heart transplant, that would cost the family Rs. 25 lakhs. But Shlok's family had already exhausted their savings and had no money left for the transplant.

But thanks to crowdfunding, the family successfully raised Rs. 17 lakhs, out of which they raised Rs. 6.5 lakhs in just one day! Shlok managed to get a heart transplant, much to his parents’ relief.

You can check out his fundraiser story here.

This is a fundraiser that broke all records on our crowdfunding platform.

Riaa Kulkarni's life in Australia was hunky dory where she would enjoy going to school and coming back to her parents at home and playing with them.

Things took a nasty turn when the symptoms of her deadly illness began to show. She started feeling nauseous and weak, even even complained of poor eyesight.

Riaa's parents got her tested and were shocked to know that their precious baby girl was suffering from DIPG, one of the fastest developing brain tumours.

The hospitals in Australia refused to treat Riaa stating that her cancer is aggressive and that she has only 6 months to live.

But Riaa's parents did not give up hope. After a lot of running around, they took her to Monash Children’s Hospital in Mexico, that accepted to treat Riaa.

Though Riaa's treatment was guaranteed, it was the funds that hung like sword on Riaa's parents heads, as they had exhausted all their savings on whatever initial treatment their daughter needed. Now, they needed Rs. 60 lakhs for Riaa's pending treatment and chemotherapy sessions.

They crowdfunded on Impact Guru and broke all records by raising Rs. 51 lakhs in just 2 months.

Though Riaa started responding well to chemotherapy initially, cancer took the better of her and she passed away recently.

However, one must note that crowdfunding is a powerful tool that can help you atleast get the treatment that is needed for a suffering loved one.

Baby Anans woke up in the middle of the night with an uncontrollable fit, leaving his parents shocked. They managed to make him sleep for the night and rushed him to the hospital the next morning.

Doctors found out that there was a blockage in Anas's brain that was causing the fits and needed to be removed with a surgery.

The doctors began to operate but had to leave the procedure mid way as Anas began to bleed profusely. They put him on ventilator and said that the only other option for Anas's survival was for him to be on the ventilator till he becomes okay.

Anas's parents needed Rs. 18 lakhs for their son's continued treatment. But they had already spent close to Rs. 11 lakhs on Anas's medical bills and had no more money left to spend.

As a result, they crowdfunded on Impact Guru and were astounded to see the results. Anas's campaign had reached the goal amount in less than 10 days! As of August 2018, Anas is still on a ventilator but is on his way to recovery.

Sampriti suffered a minor fall in early 2017 but it wasn't a major cause for worry for her parents as they assumed it to be a small injury that would recover soon. However, the shocking blood tests proved otherwise. Doctors discovered that Sampriti was suffering from Leukemia and would need 2 years of treatment involving Chemotherapy and Radiotherapy sessions.

Sampriti's parents decided to move to Mumbai for her daughter's treatment and made do with bunking in a hospital room, as they had no money to rent a flat in Mumbai. They needed Rs. 14 lakhs for Sampriti's treatment but couldn't afford due to their meager savings.

Luckily, Sampriti's father learnt about crowdfunding and decided to raise funds on Impact Guru. It provide to be a life-changing affair for them as they raised the required amount in just 3 days!

Sampriti is out of danger and well on her way to recovery. You can check her fundraiser story here and success story here.

Shradha was just 2-months-old when it was discovered that she had a hole in her heart. Her parents put her on medication and when she was 8 months old, the doctors advised that she undergo an open heart surgery.

Shradha's condition kept deteriorating; she would struggle to breathe and eat. She was getting weaker by the day.

The surgery would cost Rs. 5 lakhs, a sum her parents couldn't afford as they hailed from a poor background and had sold everything in order to pay for their daughter's medication,  the first time.

They crowdfunded on Impact Guru and raised Rs. 4 lakhs with which they could get their daughter's surgery. Today, Shradha is hale and hearty and even celebrated her first birthday! Thanks for the generosity of her wonderful donors.

We have more such inspiring stories that you can read below:

Karthikeyan Won The Fight To Save His Newborn Daughter's Heart