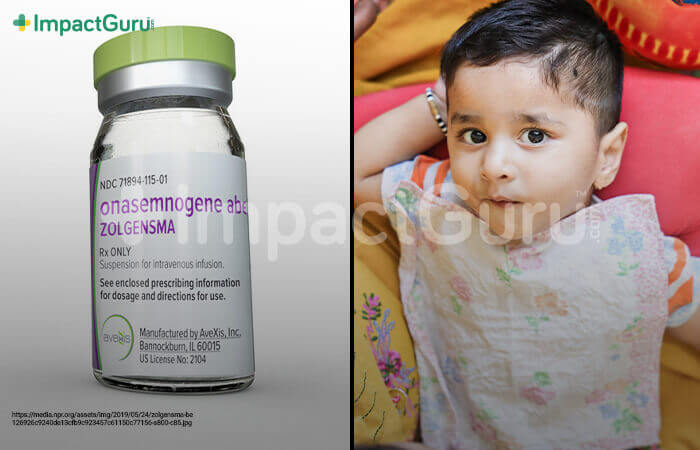 A Rs. 16 Crore Treatment For A Disease That Took India By Storm: What Do We Know About SMA?

Spinal Muscular Atrophy (SMA) is a deadly disease that affects approximately 1 out of 7744 children in India. A few years back, there were barely any treatments for SMA. At the most, patients were given supportive care like physiotherapy. But over the years at least 3 new treatment options have come up to fight SMA. This medical breakthrough has given children suffering from SMA a new hope at living a better quality life.

Let’s delve deeper to understand everything we know about SMA and its treatment:

What is SMA and how is it treated?

How does Zolgensma work?

The drug works by replacing an abnormal SMN1 gene with a normal SMN1 gene. It is given through an intravenous infusion, which means that the drug is administered directly into a person's vein. Once injected, Zolgensma begins to take effect immediately. It is observed that most children’s symptoms begin to improve significantly within a month of taking the dose.

What is the cost of Zolgensma?

Zolgensma is the world’s most expensive drug. The cost of one dose of Zolgensma is approximately 2.1 million USD (INR 16 Crore). The drug has to be imported from the US since it is not manufactured in India.

Why is it so expensive?

The procedure involved in making a single dose takes years and needs high expertise and advanced infrastructure. The reason for its extremely high cost is due to its miniscule market size and also due to its incredible capability to treat a rare disease that had no known cure for years.

How can crowdfunding help children who need the wonder drug - Zolgensma?

Through online fundraising platforms such as ImpactGuru,  people now have a platform to share their story and raise funds for medical treatments by reaching out to a vast social circle that extends far beyond their own. Here’s how young children received the most expensive drug in the world by crowdfunding on ImpactGuru:

Baby Teera received Zolgensma on February 26, 2021 and is now on the road to recovery.

She was diagnosed with SMA- Type 1 back in November 2020 when she was just 2-months-old. Her parents started an online fundraiser on ImpactGuru and her story went viral across various social media platforms. Within 159 days, Rs 14.93 crores were raised by 87k kind donors which helped Baby Teera get Zolgensma.

Little Dhairyarajsinh from Ahmedabad got his dose of the life-saving drug- Zolgensma on May 5, 2021. His fundraiser on ImpactGuru broke records as it raised Rs 16 crore from over 2.64 lakh generous donors in just 42 days!

Three-year-old Ayaansh from Hyderabad got his dose of Zolgensma on June 9, 2021. This was only possible due to the generosity of 62k+ donors who helped in raising Rs 14.84 crore. Celebrities like Virat Kohli, Anushka Sharma, Sara Ali Khan and Arjun Kapoor came forward to donate and spread awareness about Ayaansh’s story on social media.

These success stories proved that crowdfunding has the potential to combat rare diseases.

Fighting SMA is a long process and can be overwhelming for the patient as well as the family. There can be better awareness around SMA. Early diagnosis and timely treatment for this rare disease can prevent further progression of the disease. The drug needs to be made easily accessible and affordable.

A few children on ImpactGuru are still waiting for their dose of the wonder drug- Zolgensma and a chance at a pain-free life. You can help them fight this battle by donating to SMA fundraisers here. If donating isn’t possible, please consider sharing their stories on your social media handles to help them reach out to more and more people.