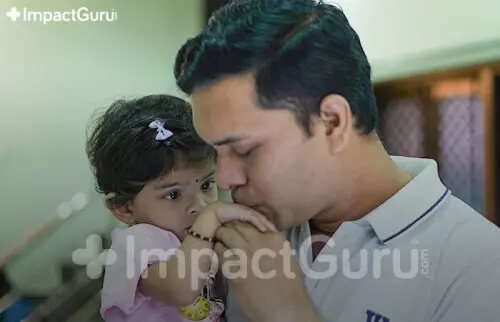 3 Stories That Created An Impact On Our Crowdfunding Platform

What makes a fundraising story impactful? Is it the use of images, emotions or just plain facts? To be perfectly honest, it's a combination of all three. You can add a video appeal and make sure your story covers all the relevant details to make your fundraiser really shine. However, your actions will only get you the impact you want when people are actually able to access your fundraiser. Set the ball rolling by sharing it with your friends, family and colleagues, who in return will share it with their social network. The online community is a powerful channel and the more people engage and connect with your story, the more donations you attract.

Over the years, Impact Guru has helped patients share their story with the world and get the best treatment and care with the support of over a million donors

Let us look at stories of 3 patients on Impact Guru which created an impact:

Swarup’s birth added a lifetime of happiness in the Divekar household. The Divekars’ were a happy family until one incident changed everything.

3 year-old Swarup was diagnosed with ETMR. Little Swarup underwent the surgery a few months back which was successful. But his battle didn’t end there.

The doctors suggested that the 3 year old would have to go through 3 cycles of chemotherapy, collection of stem cells and 3 rounds of tandem transplants. The entire course of treatment was estimated to cost Rs. 46 lakh.

The fundraiser achieved its goal by raising more than Rs 53.7 lakhs in 117 days with the support of 4617 donors. Little Swarup is now back at home with his family! His conditions are stable enough post-chemotherapy.

You can read more about Little Swarup’s story here:

Little Shravya is 2 years old. She is the only child to a young couple. In November 2020 her parents received the shock of their lives when they found out that she couldn’t do simple things like move her hands and legs or even crawl.

The one-year-old was diagnosed with SMA-Type 2- a disease which affects the central nervous system and voluntary muscle movements. At the age of 2, she doesn’t understand much about what’s happening. All she can express is that she is in pain.

Eventually, she could lose all her internal organ functions. The cure? A life-saving drug called Zolgensma which is worth Rs 16 crore.

The fundraiser has raised more than Rs 3.54 crore in 59 days with the help of 38.7k+ donors. Shravya’s battle is only just beginning as after a month, she will be ineligible to receive Zolgensma.

Without Zolgensma, Shravya's health has been on a constant decline. She's unable to walk or move her limbs like she could earlier. She remains as still as a stick now.

The doctors have said that if she doesn't get Zolgensma before her second birthday in August 2021, Shravya may lose grip on life. Please keep donating and sharing this fundraiser across social media platforms before time runs out!”

You can help save Shravya from the clutches of SMA by donating here.

Tahoora is the eldest of three siblings. Back in August 2020, when her father was diagnosed with Covid-19. She took it upon herself and became her mom’s support system and also took the responsibility of her siblings during those dark days.

Her father recovered and things were just starting to look better but fate had other plans. Tahoora noticed a lump under her right knee. After getting admitted to a hospital, she was diagnosed with Ewing’s Sarcoma. For the past six months, Tahoora has gone through constant chemotherapy sessions. Tahoora’s father could not afford the treatment anymore. The doctors said that if Tahoora’s chemo is stopped, the cancer will spread and they’ll have no choice but to amputate her leg. Her father couldn’t afford Rs 6.9 lakhs that was needed for continuing Tahoora’s chemo sessions.

Tahoora is going forward with her chemo. Her treatment has been able to continue only due to the support of donors who came forward to ensure that Tahoora gets her treatment on time and recovers quickly.

These fundraiser stories left an impact on thousands of donors who came forward and donated generously to save these patients from their illnesses.

You can make a similar impact in somebody’s life by donating to fundraisers here. You have the opportunity to donate to any cause which is dear to you. Your donation would make a whole lot of difference to the patient and their families.